What We’re Reading: YA Thrillers

This month at writeonsisters.com Caryn and I review YA thrillers! This is one of my favourite genres, and I’m stoked to recommend one of the best books I read this year:

Heather’s Pick: HOW TO LEAD A LIFE OF CRIME by Kirsten Miller 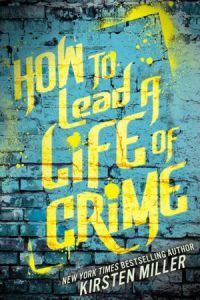 Lately I’ve been fascinated with the psychopaths in our midst, those people who are just born bad and lack empathy. And this book asks the question: “What if there’s a school that trains psychopaths and releases them into the world as super criminals?” Then takes it one step further with: “What if the school also attempted to create sociopaths?” Crazy though it may sound, I think the state of our world makes it easy to buy into this concept and imagine this really happens, and that makes the book even more terrifyingly thrilling.

The Good: Well, everything! There’s a seriously damaged main character with a good soul and a tragic life who needs to work out his sh*t and keeps getting it wrong, even though at first you think he’s got it right. The evolution this guy goes through is one hell of an accomplishment, writing-wise. The secondary characters are also gritty gems, but there are too many to list here. The twists and turns all hinge on characters surprising us, but in ways that are true to their personalities. There’s even a little bit of magic, if you believe in that. If you don’t, then you can write it off as hallucinations.

The Bad: Some readers may find this book long. My boyfriend did. He thought the first half was boring, and was more interested in the character of Joi than the main character Flick. He thought it was really Joi’s story. I disagree with him. It’s definitely Flick’s story because he’s the one who had issues to resolve and had to change. Joi knew what she was doing and was in control all along. No demons to wrestle for her. As for boredom, I wasn’t bored once, but perhaps that’s because I loved watching the psychological mind f*ck unfold as Flick gets his bearings at the Mandel Academy.

Note: The book jacket gives away a major plot point that doesn’t happen until halfway through the book (page 273 to be exact). Don’t look if you don’t want a spoiler. Then again, the summary on Goodreads gives it away too. Seriously, marketing people, you thought the only hook of this book was the romance angle? Which is just a small part of the book but happens to be a huge spoiler? Shame on you guys!

In Conclusion: Read this book anyway, even if you know the spoiler. It’ll thrill you, horrify you, and then reassure you that while there is powerful evil in the world, there’s good in most of us.